Mary Ann Mason, UC Berkeley’s first female graduate dean and a dynamic champion for gender equity and work-family balance in academia, died at her home in San Francisco on July 27. She was 76.
A former contributing member of GTA, she was widely admired for her warmth, intellect, elegance and steely determination. Mary Ann advocated steadfastly throughout her career for families and for women breaking into male-dominated professions.
In more than a dozen books, including The Equality Trap, Mothers on the Fast Track, and Do Babies Matter? Mary Ann and her co-authors examined the obstacles keeping women from being competitive in many professions and sought to remove them.
During Mary Ann’s distinguished two decades at UC Berkeley, she served as a professor of social welfare before ascending in 2000 to dean of the campus’s Graduate Division, which served some 10,000 students. She spearheaded the expansion of family-friendly policies for faculty and graduate students, advocating for paid parental leave, paid maternity leave, teaching relief for new parents, dual-career hiring policies, and more childcare facilities.
The result became a national model for gender equity in ladder-track academia and, in 2007, earned her the Berkeley Citation, one of the campus’s highest honors, which was presented to her by then-Chancellor Robert Birgeneau.
Eve Ekman, Mary Ann’s daughter with acclaimed psychologist Paul Ekman, her husband of 40 years, described her mother as a caring person, whose iron will was softened by her velvet glove. “She was a profoundly emotionally intelligent person who made people feel at ease because she genuinely cared about them.” 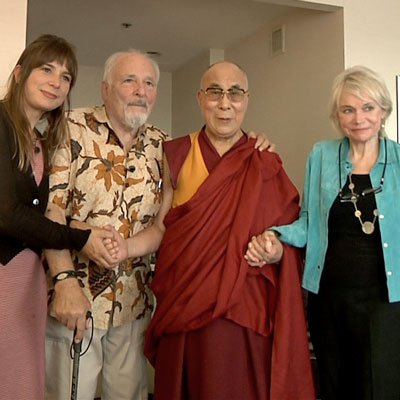 Mason with the Dalai Lama, and Paul and Eve Ekman in Anaheim, California in 2016. (Courtesy of the Ekman family)