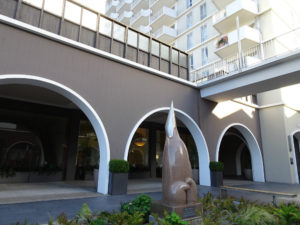 If you’re a resident of one of the 1,254 rental units at the Gateway Apartments and Townhomes, it’s important to know what a valuable service the Gateway Tenants Association provides.

First, it works to safeguard rent control – a great asset that the City’s tenants often take for granted, but shouldn’t.  The San Francisco Rent Ordinance limits a landlord’s ability to increase rents in most pre-1979 buildings by tying the annual increase to a version of the Consumer Price Index.  Other cities including Berkeley, San Jose and Santa Monica also have rent control.

GTA was founded in 1982 after our landlord took the position that rent control should not apply to the Gateway complex, then known as the Golden Gateway Center.  More information about this is on the History page.

Gateway tenants led by WWII bomber pilot Tom Flowers took the landlord to court and won.  GTA has acted on behalf of Gateway residents ever since.

“Every once in a while there are local or statewide attempts to either repeal rent control or limit its scope,” said GTA president Bill Hannan, “and we need to be ready to oppose those attempts.”  Although nearly 70 percent of San Francisco residents are renters, local Proposition E in 1998 tried – but failed – to cut back the categories of buildings covered by rent control.

In June 2008, the Howard Jarvis Taxpayers Association sponsored state proposition 98, trying to amend the California constitution to phase out rent control everywhere statewide. In that election, 61.6% of the voters voted “no,” and that measure was defeated.

“It was a ballot issue and we knew it was up to the voters,” Hannan said.  “We had to make sure the voters were aware of what was going on.”

In addition to defending renters’ rights, GTA communicates with Gateway management about what’s going on in the complex.  Most recently, GTA representatives spoke with management about three major issues:

– Security on the elevated plaza level

– Lighting in the garages

Several residents have complained about security on the plaza level where the townhouses and patio units are located.  In response, Gateway management has obtained occasional SFPD patrols in Davis Court, and retained the services of a security consultant, who advised that the most effective way to increase security is to close off or reduce public access to the plaza level.

That step would require action by the Board of Supervisors, because when the Gateway was built the City required the developer to formally agree to public access.  “We’re waiting for management to decide,” Hannan said.  “If management decides to go forward, we’ll ask for feedback from the residents.  That would be a very important decision.”

GTA board member Bob Demchick has held meetings to set up a volunteer Town Watch program at the Gateway that would not involve active patrols, but would encourage vigilance and awareness.

Recently GTA received word that there was no Vista North elevator service for several hours one night.  Vista North and Vista South, being smaller buildings, have only two elevators each.  Vista North had one elevator out of service awaiting a replacement part when someone triggered a fire alarm, taking out the other elevator.  This is inconvenient at best, but particularly disturbing to disabled residents.  Clarisse Tan of Gateway management has agreed to hire an elevator consultant to review the contractor’s maintenance procedures.

Finally, GTA has discussed garage lighting with head of operations Jose Angulo.  To comply with Title 24, a building efficiency law, the Gateway is installing motion activated sensor controls for lighting in the garages and possibly other common areas such as stairwells.  Some residents are unhappy with increased darkness, including darkness during a recent fire alarm incident in Vista East.  There are apparently a few bugs that need to be worked out.

GTA joined several other neighborhood organizations in 2012 and 2013 to successfully oppose the 8 Washington luxury condominium project behind Vista East, which San Francisco voters rejected by a margin of nearly two to one on the November, 2013 ballot. GGTA and its members generously contributed to the building of the privately funded children’s playground which opened in Sue Bierman Park in July, 2013 and is full of happy young customers today.

Another important issue for GTA is affordable housing.  “Lee Radner and I are serving with others on a working group meeting with the Portand the Mayor’s Office of Housing to talk about the proposed affordable housing project at Seawall  Lot 322-1 at Front and Broadway currently used as a parking lot,” Hannan said.

“The Port would like to develop the property for affordable housing with retail on the ground floor and a public parking garage,” he added.  “Several neighborhood organizations including GTA and the Barbary Coast Neighborhood Association and Telegraph Hill Dwellers have expressed concern that there is inadequate housing for moderate-income residents of San Francisco, and propose that the new project include moderate-income housing.”  The difficulty with this appears to be that federal subsidies are available to build low-income housing, but not moderate-income housing.

These groups are also concerned about the public parking garage and what the street-level facades will look like.

A previous article about the affordable housing issue is online here.

GTA representatives attend meetings of the Northeast Waterfront Advisory Group and board meetings of the BCNA.  All GTA members are non-voting members of BCNA, and are welcome to attend GTA and BCNA social events.

GTA social chairs JoAnn Michael and Tom Gilligan cheerfully preside at a no-host social event at 5:30 p.m. on the first Tuesday of each month at the Holding Company, Two Embarcadero Center, third level. (UPDATE: The Holding Company changed its name to Patriot House in January 2015.)